What Kamala says about Joe

Joe biden’s strategy so far has been to stay out of the way as far as possible. The more the news cycle is filled with President Donald Trump, covid-19 deaths and economic misery, the better for Mr Biden’s campaign. So far it has worked: he is nine points up in our average of polls. Democrats have a shot not just at taking the presidency and retaining the House but also at capturing the Senate, which earlier this year had looked out of reach. With that trifecta comes the power to change America.

But to what end? Mr Biden’s stealth campaign is fine as an approach to winning the election in November, but it has not revealed much about what sort of president he might be. His choice of Senator Kamala Harris as his running-mate is different. Because this is the first big call he has had to make, it says something about how he would make decisions in the White House. It also gives an indication of the ideological leanings of a future Biden administration.

Belarus’s election was a sham. The West’s response has been feeble

In a country in the heart of Europe grisly acts were being committed this week, with the approval of Russia and China, the mildest of European protests and near-silence from America. An election was rigged; the challenger was forced to leave the country; protesters are being beaten and jailed. The perpetrator is Alexander Lukashenko, a 65-year-old dictator who has ruled the former Soviet republic of Belarus for most of its 30 years of independence. With luck, though, he may have overreached.

After a presidential election on August 9th the authorities proclaimed that Mr Lukashenko had won 80% of the vote. But the process was rigged from the start (see article). Opposition candidates had been jailed or had gone into exile; most independent observers were barred and “preliminary” voting was extended to allow more time for ballot-stuffing. Mr Lukashenko has done all this before and got away with it, largely because he retained enough support to claim a degree of legitimacy.

The dereliction of American diplomacy

The american embassy escaped the blast in Beirut’s port unscathed. Many Western countries either have missions in the city centre or diplomats who live in the area. The wife of the Dutch ambassador was killed, as was a German diplomat. But America’s embassy sits in the mountain village of Awkar, five miles (8km) from the port. Security measures are onerous, a hangover from the bombing of the American embassy in Beirut in 1983, which killed 63 people. It took a week before the ambassador, Dorothy Shea, a career diplomat, toured the port. The embassy has been short-staffed for much of the year because of covid-19. Even on social media it has been far quieter than other foreign powers. The ambassador has kept a low profile.

The low visibility is a small sign of a wider malaise in American diplomacy. The country’s foreign service is damaged and demoralised. Last month Bob Menendez, the senior Democrat on the Senate Foreign Relations Committee, released a report warning that the State Department was “at risk of catastrophic failure”. The report is a catalogue of the damage done to America’s oldest federal agency, founded in 1789. It describes a department haemorrhaging talent and influence. The litany of woes is summed up in a leaked recording of a briefing on Washington last November by Colombia’s ambassador there, Francisco Santos, to his incoming foreign minister: “The us State Department, which used to be important, is destroyed, it doesn’t exist.” 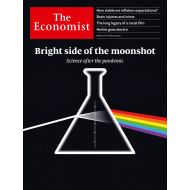