In many things 90% is just fine; in an economy it is miserable, and China shows why. The country started to end its lockdown in February. Factories are busy and the streets are no longer empty. The result is the 90% economy. It is better than a severe lockdown, but it is far from normal. The missing bits include large chunks of everyday life. Rides on the metro and on domestic flights are down by a third. Discretionary consumer spending, on such things as restaurants, has fallen by 40% and hotel stays are a third of normal. People are weighed down by financial hardship and the fear of a second wave of covid-19. Bankruptcies are rising and unemployment, one broker has said, is three times the official level, at around 20%.

Covid-19 has shut the world’s schools. Three in four children live in countries where all classrooms are closed. The disruption is unprecedented. Unless it ends soon, its effect on young minds could be devastating.

Congress, not the Fed, should bail out America’s state and local government

For most governments the pandemic is expensive. For America’s states, counties and cities, which provide the bulk of the country’s basic government services, it is a budgetary cataclysm. Lockdowns are depriving them of tax revenues just as they must spend more on public health, threatening budget shortfalls of more than one-quarter of annual revenues (see article). Investors have been dumping their bonds, making it harder to borrow. And many states are in any case required by their constitution or by law to balance their budgets, or forbidden from borrowing at all. As a result many have been drawing up plans to slash spending and lay off workers just when their services are in high demand and the economy is shrinking.

The states do have some cash stashed away for a rainy day. They have built up funds worth 8% of their annual routine spending, on average. Yet that will not be nearly enough for today’s deluge, and in any case it is unevenly distributed. In 11 states, including hard-hit New York, rainy-day funds are less than 5% of spending. Infusions from the federal government are therefore the only way to avoid ill-timed austerity. The states could need as much as $650bn (3% of gdp) to cope with the economic crash—and more to help them fight the pandemic. 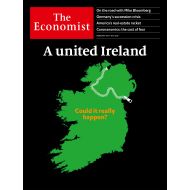