The Economist: Locked out: When and how to let migrants move again

Google has outgrown its corporate culture

It may be just 21 years old, but Google is in the midst of a mid-life crisis. As so often in such cases, all seems well on the surface. Every day its search engine handles 6bn requests, YouTube receives 49 years’ worth of video uploads and Gmail processes about 100bn emails. Thanks to its dominance of online advertising, Google’s parent company, Alphabet, made a profit of $34bn last year. Beyond its core operations, it is a world leader in artificial intelligence (ai), quantum computing and self-driving cars. Along with the bosses of Amazon, Apple and Facebook, its chief executive, Sundar Pichai, was grilled this week by lawmakers in Washington, dc, who fret that America’s tech giants need to be restrained because they are so profitable. Crisis? What crisis?

Being hauled before Congress is, on the face of it, a sign of success. But it also marks a difficult moment for Google’s leaders: the onset of corporate middle age (see article). This is a problem as old as business itself. How do companies sustain the creativity and agility that made them great, even as they forge a culture and corporate machine that is built to last? For Google the transition is especially dramatic because its founders, Larry Page and Sergey Brin, tried from the start to build a firm in which this moment would never arrive. As Google prepared to go public in 2004 they declared that it was not a conventional company, and “we do not intend to become one”. They hoped playground-like offices, generous perks and a campus atmosphere would allow it to retain the agility and innovation of a startup as it grew. The appearance of wrinkles on the corporate forehead is an admission of failure.

Fatigue. shortness of breath. Frayed nerves. Lungs mottled by scars. Months have passed since early survivors of covid-19 recovered from the disease. But some still report lingering after-effects. The disease, it seems, can inflict lasting damage, even in cases that did not prove critical. The same may be true of the pandemic’s impact on economies, especially in the developing world. Some acute dangers seem to be receding. But chronic problems loom. What does not kill these economies may still leave them weaker.

A few months ago the coronavirus shock looked financially lethal. But emerging-market bonds, currencies, and shares have rallied strongly since plumbing dramatic depths in March (see chart), thanks to a determined effort by the Federal Reserve, America’s central bank, to allay financial stress at home by relieving a shortage of dollars worldwide.

To see the damage from covid-19 to aviation, look up. Where once a criss-cross of vapour trails told of holidaymakers heading for the sun or executives keeping businesses on track, the wide yonder is now a brilliant blue. This year nearly 5bn passengers might have been expected to take to the skies, but the actual number is likely to be only half as big. A fragile recovery is susceptible to new waves of infection. Britain’s imposition this week of a quarantine on passengers returning from Spain is the latest setback. Traffic may not return to 2019 levels until 2024.

When it does rebound, the twin priorities should be to put the industry on a sounder financial footing, and to make flying less polluting. For both objectives the way forward is the same: to loosen incumbents’ grip on the skies. 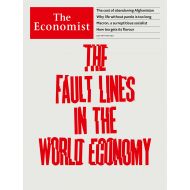