On The Economist No.16: Is China winning ?

This year started horribly for China. When a respiratory virus spread in Wuhan, Communist Party officials’ instinct was to hush it up. Some predicted that this might be China’s “Chernobyl”—a reference to how the Kremlin’s lies over a nuclear accident hastened the collapse of the Soviet Union. They were wrong. After its initial bungling, China’s ruling party swiftly imposed a quarantine of breathtaking scope and severity. The lockdown seems to have worked. The number of newly reported cases of covid-19 has slowed to a trickle. Factories in China are reopening. Researchers there are rushing candidate vaccines into trials. Meanwhile, the official death toll has been far exceeded by Britain, France, Spain, Italy and America.

Fumbling for the exit strategy

Suddenly everyone has a plan. Ideas for exiting the covid-19 lockdown are spreading faster than the virus ever did. Spain has let builders return to work, Italy has opened stationers and bookshops, Denmark is allowing children back into nurseries and primary schools. South Africa’s opposition is calling for a relaxed “smart lockdown”. In America President Donald Trump has been sparring with state governors over who should decide what reopens when.

How deep will downturns in rich countries be?

As the virus upends productive activity across the world, the question now is how bad things will get. On April 14th the imf warned that the global recession would be the deepest for the best part of a century. But the severity of the pandemic and the uncertainty around the duration of lockdowns are such that economists’ models, trained on business cycles in the post-war era, are of little use. Some companies, such as Starbucks and Dell, have pulled their guidance on annual earnings, declining even to hazard a guess about the future. Amid the fog, however, one thing seems certain: some economies will suffer much more than others. 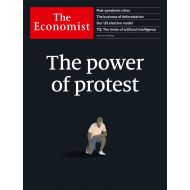