Some paragraphs from the magazine of combo

International Women's Day: Meet 11 of Asia's trailblazers
From leading Netflix's India ambitions to funding the next unicorn, these are the names to know
Despite progress over the past few decades, women in Asia still face significant, structural barriers to success. Ahead of International Women’s Day 2020, Nikkei Asian Review has selected 11 inspiring female leaders in business, politics, activism and the arts -- pathbreaking women who are driving change.

Nikkei Asian Review: "WE'RE NOT GOING BACK TO WHERE WE WERE"
How the coronavirus is reshaping Asia's borders, business and trade
As countries turn inward, pandemic threatens the foundations of globalization
TOKYO -- From his apartment in Manila's Bonifacio Global City, Eric Go can still see planes going past his windows. Like many in Southeast Asia's middle class, Go, who grew up in the U.S. and works for an e-commerce company, has been used to near-seamless mobility: ride-hailing, low-cost airlines and direct flights back to his family in New York.

"It was never really an issue. I can hop on a plane and go wherever I want to go. That's how I see freedom," he said. "It's like, OK, there's turmoil in Manila, or it gets too hot, I can leave. And now I can't leave at all."

Nikkei Asian Review: READY PLAYER ONE
Sony CEO Yoshida navigates coronavirus and activist attacks
New PlayStation launch clouded by pandemic as company seeks to revive innovation
TOKYO -- Before the novel coronavirus outbreak began, Sony CEO Kenichiro Yoshida had many reasons to be optimistic. Under his leadership the electronics-to-entertainment conglomerate had regained its momentum, and with it the respect of its shareholders. Yoshida, a quiet and reflective figure, had seen off an attack by the U.S. activist hedge fund Third Point, and was preparing for the launch of the next generation of its iconic PlayStation games console.

The Economist: Meet the new boss
What it takes to be a CEO in the 2020s
The rules of management are being ripped up. Bosses need to adapt

On paper this is a golden age for bosses. Chief executives have vast power. The 500 people who run America’s largest listed firms hold sway over 26m staff. Profits are high and the economy is purring. The pay is fantastic: the median of those ceos pockets $13m a year. Sundar Pichai at Alphabet has just got a deal worth up to $246m by 2023. The risks are tolerable: your chances of being fired or retiring in any year are about 10%. ceos often get away with a dreadful performance. In April Ginni Rometty will stand down from ibm after eight years in which Big Blue’s shares have trailed the stockmarket by 202%. Adam Neumann got high in private jets and lost $4bn before being ousted from WeWork last year. The only big drawback is all those meetings, which eat up two-thirds of the typical boss’s working hours.

How to make sense of the latest tech surge
In 2018 a new word entered Silicon Valley’s lexicon: the “techlash”, or the risk of a consumer and regulatory revolt against big tech. Today that threat seems empty. Even as regulators discuss new rules and activists fret about the right to privacy, the shares of the five biggest American tech firms have been on a jaw-dropping bull run over the past 12 months, rising by 52%. The increase in the firms’ combined value, of almost $2trn, is hard to get your head round: it is roughly equivalent to Germany’s entire stockmarket. Four of the five—Alphabet, Amazon, Apple and Microsoft—are each now worth over $1trn. (Facebook is worth a mere $620bn.) For all the talk of a techlash, fund managers in Boston, London and Singapore have shrugged and moved on. Their calculus is that nothing can stop these firms, which are destined to earn untold riches. 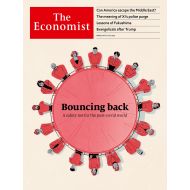